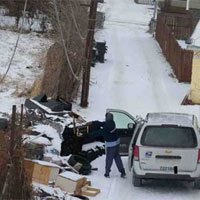 The Cambridge Dictionaries Online defines “fly tipping” as “illegally leaving things that you do not want next to a road, in fields, in rivers, etc.” Fly tipping is another word for illegal dumping or waste dumping, more commonly used as a British slang.

Fly tipping is a huge problem in the UK. According to BBC, the UK has “2.5M cases of illegal dumping were recorded between April 2005 and 2006… with 1,249,527 incidents reported in Liverpool alone.” The UK is not the only country to have fly tipping problems. In Australia, “illegal dumping costs one in 10 councils more than $500,000 a year.” Here in the US, it was reported in 2014 that $17 MILLION a year was spent on efforts to address illegal dumping in just the City of Baltimore!  Illegal dumping is an international problem with communities across the world seeking an effective illegal dumping solution.

Commonly found fly dumping items include tires, old furniture, household garbage, construction debris, appliances, yard waste, and hazardous waste. Many cities are experiencing an increased amount of illegal dumping due to rising disposal costs people just don’t want to pay. Some communities such as Smith County, TX have also seen an increase in illegal dumping as burn bans were implemented. Since residents no longer are allowed to burn trash and other household items, they just decide to dump their trash in secluded roads or remote locations. Perhaps they do not realize that this is also illegal. If they are caught illegally dumping trash, the fines for this penalty are significantly higher than the disposal fees they would have paid.

Many cities & counties are enforcing tighter illegal dumping laws to emphasize the seriousness of this activity. Their programs are successfully addressing the crime by creating public awareness of the penalties associated with illegal dumping and the consequences they may face. More programs are integrating technology to capture and identify these criminals successfully, further sending the message of prosecution WHEN they are caught instead of IF they are caught… they’re not messing around with the criminals creating a mess in their community!

Is Graffiti Removal a “Band-Aid” Than a Solution?
Scroll to top Call Now Button