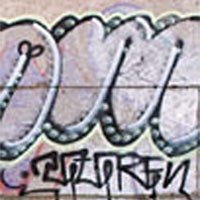 Each City has their own statistics on what graffiti costs, which could include the expense of the chemicals to remove the graffiti, the paint to repaint the damaged surface from the graffiti, and valuable labor resources used to paint over the graffiti. The Center for Problem-Oriented Policing, (POP), estimates the graffiti problem costs our nation $12 billion  annually.  But what about the hidden costs?  What does graffiti cost a child who has to go to school that is marked with graffiti or play at a park tagged with graffiti warnings?  According to POP, the offender is “conducting a psychological battle with authorities”.  Children who live in communities with graffiti know this battle all too well. How is a teacher going to have authority in the classroom when the students see there is no authority on the graffiti walls of their school?   How is a child going to respect the police officer who can’t keep the offenders from graffiti marking the streets? How can a child feel safe playing at the park when offenders have placed graffiti threats on the playground equipment?  Are cities doing everything they can to win this battle and protect the most innocent of victims?   The true cost of graffiti cannot be measured.

Copper Theft “Is an Epidemic”