You are here: Home1 / copper theft

Metal theft refers to incidents in which goods are stolen and stripped for their value of various types of metal.  Metal recycling is lucrative, and thus, the motive behind metal theft.

Metal theft takes on numerous forms and there are several applications for which they are used, and the motives for each metal robbery differ depending on both value and risk factor.  Common targets include car lots for their catalytic converters, business centers for their air conditioning units, roofing material for its lead, bronze plaques from graveyards and monuments, and construction sites or stadiums for their copper wiring and cables.  Each metal target has its own marketplace value, as well as its own risk factor depending on its level of vulnerability and its surrounding security.

For the valuable metals that have the security risk-factor added to its theft prospect, there is evidence that a specific type of security that involves the intervention of catching the metal thief in the act, may serve as a type of behavioral modification by altering their thoughts toward changing their behavior.  This is due to the negative reinforcement or by the “warning” they’ve just encountered.  As humans, we are wired as such to alter our thinking and therefore change our behavior based on both positive and negative outcomes. Behavior modification is just that, a reversal of one’s decisions built on a known outcome.

There is a multitude of research in benefits surrounding behavior modification. Its therapeutic techniques first became popular in the 1970s, and it is used for countless behavioral breakthroughs today. One study presented children with ADHD in a behavior modification group turned out to have 50% less felony arrests later in life then the children who were not in behavior therapy. The reason it works is because its purpose is practical—the use of thought intervention begets a halt and modification in behavior.

Bringing us back to our theory on how the application of behavior modification in security may stop a metal thief from finalizing their treachery, a sudden interruption in metal thievery and the prospect of recycling stolen metal for cash suddenly becomes the prospect of jail time.  Most people, even thieves, do not like the possibility of a negative outcome.  A crime-deterrent camera system serves the use of crime intervention by warning the criminal that they are on camera and prosecution is around the corner.  This is the security technique of the future… using behavior modification as a deterrent for metal theft. 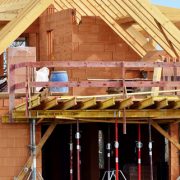 Construction theft is a major problem throughout the United States.  Equipment and tools are left at the site for convenience and if not protected become a target.  Here are some action points and ideas to reduce your risk.

30% -85% of the theft is from someone that you authorize to be on your job site. An article in allBusiness lists six bullet points to protect yourself from employee theft.

Point 3 from this article really sticks out.  It talks about ways to eliminate opportunities to steal.  It also mentions setting up alarms and checking your perimeter for access points.

Alarms are an effective deterrent against crime.  By setting up alarms around the perimeter of your construction sites, it reduces the total risk of construction theft, both by employees and by thieves outside your employee network.  Alarms cause an instant reaction in the mind.  Would be criminals in the offense are immediately placed in the defense, thereby giving them a second chance to rethink their choices of committing that crime.

Another effective means of deterring crime includes setting up visible security cameras within the same perimeters of the alarms.  If the security cameras are visible to the thieves, it will reduce the risk of construction theft by reducing the impulse to steal and replacing it with the fear of being caught.

An added benefit to installing cameras is you now have the resources to identify the construction thieves.  In MEMPHIS, TN, four men are accused of stealing millions of dollars’ worth of construction equipment .

Start being proactive and protect your equipment from theft. 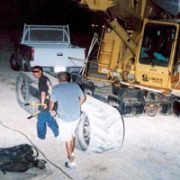 Not surprisingly, theft is the most common crime in the construction industry. According to a study done by The Chartered Institute of Building, over 92% of respondents in the construction industry were aware of theft occurring in their company. Most of these thefts are the result of a lack of security when the sites are closed. An unsecured site is an open invitation to criminals so all measures should be taken to secure the site. While permanent sites can be properly protected via fixed surveillance systems, temporary locations such as construction sites require a more flexible solution.

The cost of being the victim of construction theft runs deeper than just the value of the items stolen. You also have to factor in the delays in work, the cost to replace materials and supplies, and the cost of renting or replacing equipment and tools along with the increased insurance premiums you’ll have to pay going forward.

It is critical to implement a game plan to proactively prevent thefts at your construction site. A solid security plan should involve multiple layers of theft deterrents and measures. The harder it is to access your site, the less likely thieves will target it.

A short-term investment will turn out to be very cost-effective in the long run. The cost of securing your site will be quickly regained through reduction in thefts. The cost of security is part of the cost of doing business in the construction industry.

Copper theft is a serious problem.  There must be ways to stop scrap metal theft or the US will waste millions of dollars a year replacing it.  An article published in CNBC says that copper theft in the US has become “like an epidemic”. CNBC describes copper theft as “1 billion business”. Center for Problem-Oriented Policing estimates the economic impact to replace certain scrap metal crimes could be anywhere upward from $500,000 to $11 million.

Copper theft is usually the most popular of scrap metal crimes. Metal thieves in Utah were able to “steal 6 miles of copper from Utah highway”, copper valuing $50,000 and $60,000. UDOT spends roughly $300,000 to $400,000 annually replacing copper alone.  According to Mike Adelizzi, president of the American Supply Association, who is quoted in the CNBC article says, “There’s no question the theft has gotten much, much worse,”. Copper was valued a lot higher before the recession in 2008. Even with the drop in copper value, copper theft has risen. Some people predicted that copper theft would decrease with the recession, but this was proven wrong.

Copper theft is very costly. The Department of Energy states copper theft causes almost $1 billion in losses to U.S. businesses each year. CNBC says governments are developing laws and protocols for stopping scrap metal theft, but they say, “Stopping theft is unlikely”. Preventative measures need to be taken and researched to find new ways to stop scrap metal theft, or this copper theft epidemic may continue.