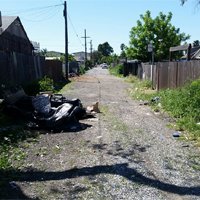 Michael Williams from the Engineering Services Department of City of Richmond said that after the FlashCAM was installed, “the protected/project alley has remained clean (and sober) for over a month already!”.

Only recently, this Iron Triangle alley was a source of neighborhood blight and a hot spot for illegal dumpers.

But with the recent launch of the pilot project called Emerald Alleys, the 640-foot-long stretch between Barrett and Ripley avenues has become an inviting pathway for pedestrians and cyclists sided by attractive landscaping. That landscaping isn’t just for aesthetics; it features a natural stormwater drainage and filtration system that prevents polluted water from running off into the Bay and recharges groundwater, the city says.

On Friday, city officials held a ribbon-cutting ceremony on the Mathieu Court Alley Project. The collaborative effort teamed the city with local nonprofits and neighbors to transition the alley into a multi-use green space. Inspired by similar projects in Los Angeles and Chicago, Richmond hopes to transform alleys citywide.

Mathieu Court, which is 25 feet wide, is the first alley piloting the project. It had fallen into great disrepair, becoming a storage lot for cars, other people’s trash and an attractive location for illegal activity, said city project manager Michael Williams. The photo below exhibits how the entire length of Mathieu Court appeared before the improvements. 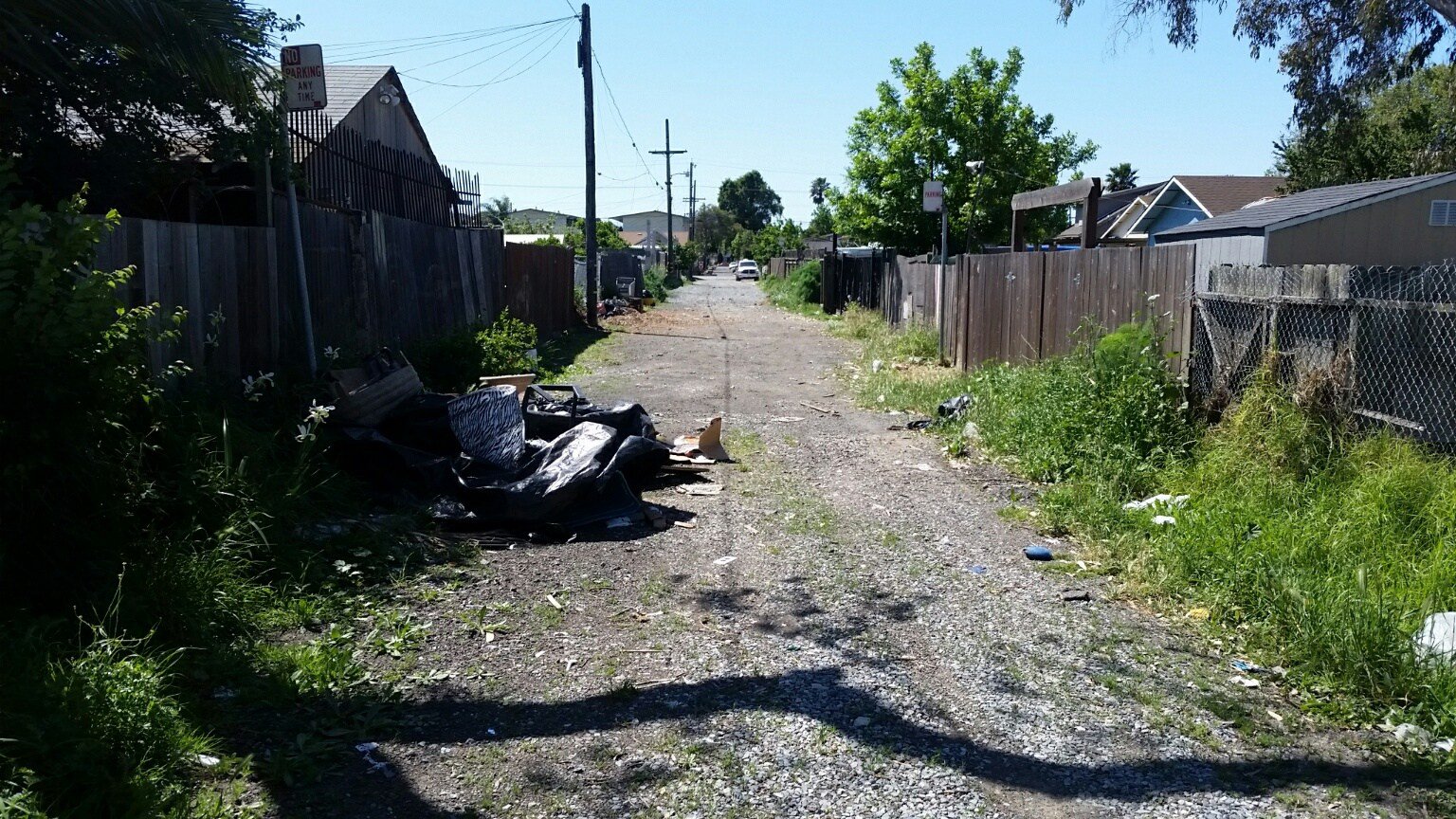 Now it is lined with drought resistant landscaping, planters built by Iron Triangle nonprofit Pogo Park that will feature edible gardens, a stormwater drainage system that blends in with the pathway’s aesthetic, security cameras, and even large aesthetic rocks that discourage parking, Williams said.

The narrower alleyway reduces vehicular traffic while increasing the number of pedestrians and cyclists who use the pathway, he added.

“Limiting vehicle access will allow for more shared use of the entire space, with opportunities for children to play safely, as well as providing a safe route of travel,” the city said in a statement. 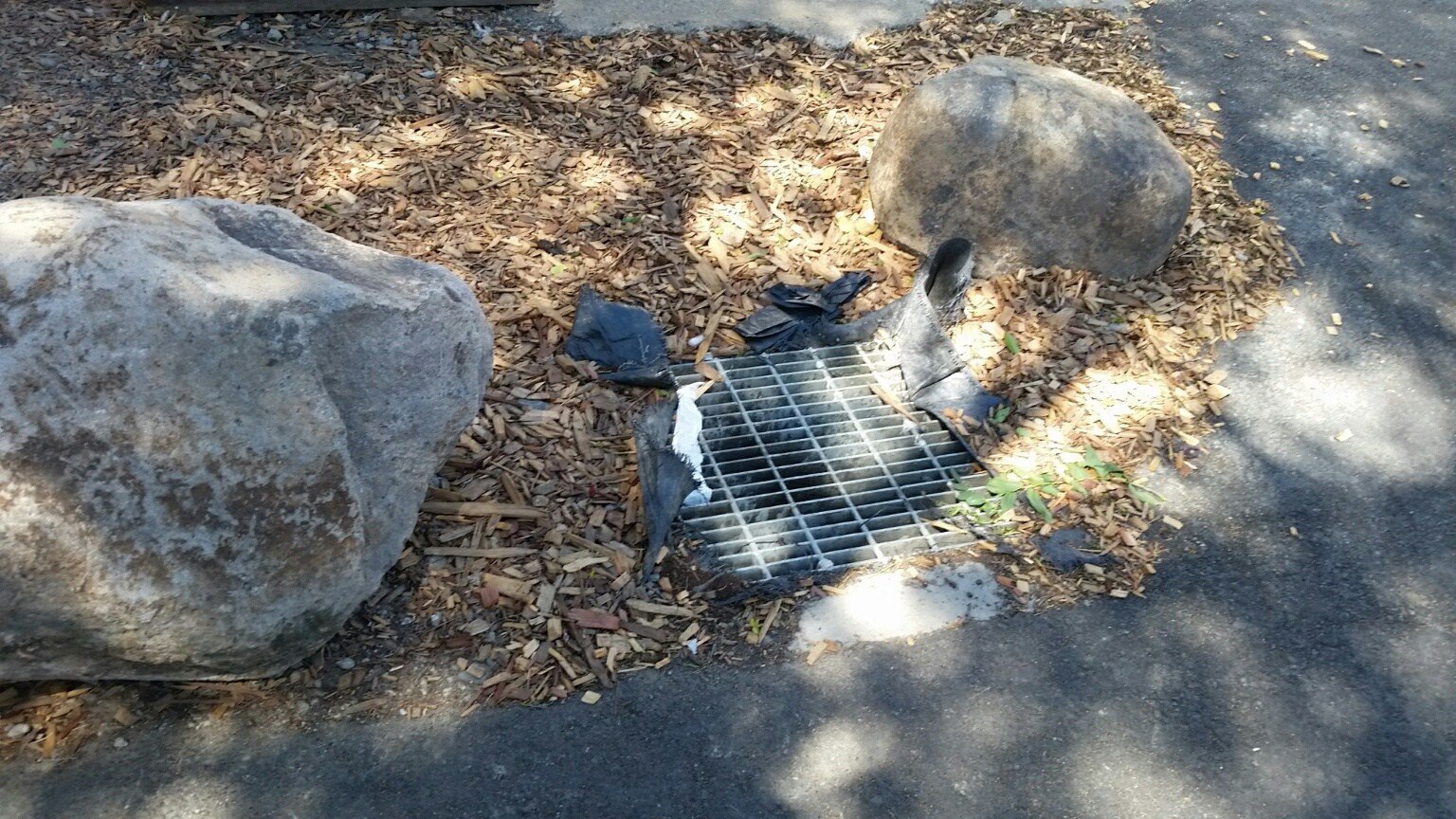 City officials to perform similar improvements at other alleys, including nearby Turpin Court, which connects to Peres Elementary. The aim is to have both alleys connect with the ongoing Yellow Brick Road Project, a neighborhood-wide pedestrian and bicycle safety project. Williams says the city is targeting alleyways without dead ends, as they are ideal for pedestrian and cycling travel.

The alley was reclaimed by the city, residents and local nonprofits last year, with construction starting earlier this year. The project received a $302,818 Urban Greening for Sustainable Communities grant from the Strategic Growth Council and $1,000 from the Rosie the Riveter Trust.

The city worked on alleyway improvements with neighbors, the Iron Triangle Neighborhood Council, Pogo Park, The Trust for Public Land and The Watershed Project.

The project has even inspired neighbors to contribute to the beautification of the alley. One neighbor Julio has volunteered his time and assistance in garnering neighbor support for the project. He was inspired to make improvements at his property in the alley, including building a scenic entryway, and is encouraging neighbors to do the same. 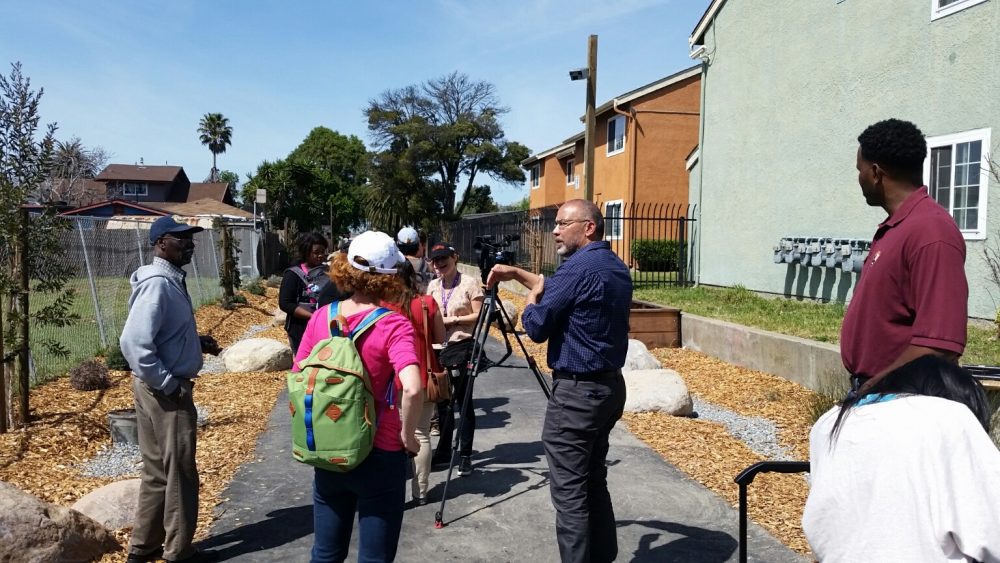