You are here: Home1 / Blog2 / Blog3 / The Fight Against Blight – The Graffiti Problem 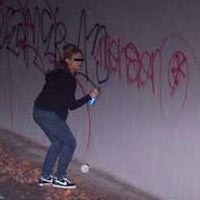 What is the Broken Window Theory?