In 2011, Q-Star Technology partnered with Graffiti Hurts by offering a FlashCAM for their grant program.  The Tyler Against Graffiti (TAG) / Keep Tyler Beautiful organization of Tyler, TX was the selected winner because of their own study they had conducted on effective graffiti deterrence strategies.

Prior to their grant application, TAG conducted a 4 week graffiti deterrence study using a FlashCAM borrowed from the city of Tyler’s Code Enforcement Department. This FlashCAM captured graffiti offenders in the act within the first week, and were able to arrest/convict these taggers.  They also rotated the FlashCAM to other troubled graffiti spots, leaving a decoy system in the original location that the FlashCAM was first installed. Since the installation of the decoy, they have not had a single incident at that location for SIX WEEKS!

Because of these results and success they’ve witnessed firsthand, TAG then applied for the FlashCAM grant and stated their future FlashCAM strategy they plan to launch for their city. They received their new FlashCAM in early February 2012 and installed it in a city owned skate park. This skate park was being tagged almost every weekend prior to installation. Now that the FlashCAM is watching over, they happily report that they have not had a single incident of graffiti at this park.

“It’s like having a guard dog on site!” says Gary Lynch of Tyler Against Graffiti (TAG).

For more information on Graffiti Hurts or the 2012 Grant Program, please visit their website at www.graffitihurts.org. 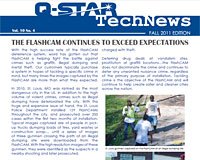 THE FLASHCAM CONTINUES TO EXCEED EXPECTATIONS: Customers are benefiting from the high resolution images captured by the FlashCAM, helping them address other criminal activity in their installation sites.

Yakima Police Department have caught nearly a dozen taggers after installing FlashCAMs to address their growing graffiti problem. The city worked to quickly paint over the graffiti vandalism as soon as possible, was not enough to stop the taggers. The FlashCAMs are rotated around the city and provides “a bird’s eye view to police and catch taggers.”