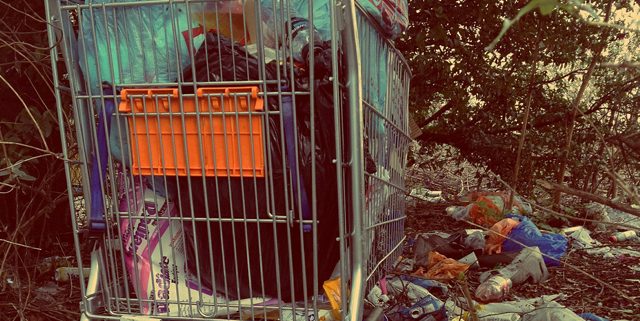 Autumn is just around the corner and soon lush green leaves, which served as screens, will be replaced by filthy trash piles previously hidden. The dirty litter sites you forgot about are now front and center in view of the whole community. Now is the time to be thinking about those illegal dump piles that are unsightly, dangerous and costly, and use your resources take care of them.

Illegal trash areas are disgusting in so many ways. Unfortunately, illegal dumpers take the beauty of a neighborhood or country lane and turn it into a dumping ground. This pile of trash whether in the form of tires, freezers or plastic bottles creates an eye sore for the community. Unlawful dumping grounds attract creatures, such as rats and roaches, that are associated with disease.  Now, land that was once enjoyed by the public has become evaded, neglected, and a target.

Illegitimate dumping sites are not just annoying, they are a hazard to the community. Most people know areas littered with trash become home to roaches, rats and mosquitoes, but did you know it also becomes the home to bacteria that is harmful to humans?  Pathogens are hiding in the debris. According to the Environmental Science & Technology Publication, “Both large and small plastic debris can act as a substratum for pathogenic micro-organisms and parasites.” This is not good news.

Besides being hazardous to the community, illicit dumping is costly to the community.  Unfortunately,  community resources that can be used in more productive programs, are being used to clean up illegal rubbish sites.  The cost to clean unsanctioned dump sites varies but an article published by the EPA states it is estimated that “urban areas have reported spending several million dollars a year.” Stopping the problem of Illegal dumping is a challenge for all cities, but now is the time to use your resources and take care of this dirty task.