You are here: Home1 / About Us2 / Solutions3 / Stop Illegal Dumping

Illegal dumping can happen anywhere – in alleyways, parking lots or remote areas that these criminals happen to come across. Especially in these remote areas, they feel that “no one is watching” and leave behind truck loads of tires, old furniture or even hazardous waste. By stoppling illegal dumping before it can happen, cities and counties can save hundreds of thousands of dollars associated with the clean-up costs.

St. Louis, MO had an illegal dumping situation that was costing the city over $4 MILLION each year. In order to stop illegal dumping, the city created an illegal dumping task force and also launched a citywide FlashCAM program, consisting of approximately 125 FlashCAMs in 2011. Within the first 2 months after installation, they prosecuted over 200 cases by being able to identify license plates with the images captured by the FlashCAM.

The city of Philadelphia, PA spends over ONE MILLION dollars in taxpayer money on cleaning up illegal dumping. In 2009, Philadelphia partnered with Q-Star Technology to launch their FlashCAM program to help stop illegal dumping and in 2010, 71 violations in the amount of $300 were issued and 48 arrests of illegal dumpers have been made by the Philadelphia Police Department Neighborhood Services Unit.  (Read more at City Of Philadelphia website).

The FlashCAM is ideal to stop illegal dumping that take place in remote areas with no available power source. The system is completely self-contained and is solar charged so it can quickly be mounted in these areas and also moved to other locations. The FlashCAM captures license plate numbers up to 250 feet even in total darkness, providing key evidence that is used for prosecuting these criminals.

Illegal dumping costs cities across the nation millions of taxpayer dollars in clean-up per year. In addition to the economic ramifications associated with this crime, the Environmental Protection Agency (EPA) reports that areas used for dumping endangers the general public by making them vulnerable to the physical and chemical hazards posed by wastes. Any type of illegal dumping into ANY waterway is a severe crime and is considered a felony in many states. The potential risks associated with dumping in waterways are immense, as there is the possibility of also contaminating wells and sources of drinking water.

Despite efforts being made in many communities to eliminate the practice of illegal dumping in their neighborhoods, the majority of the criminals responsible are not being prosecuted since many of these “dumpings” occur at night or in remote areas where there are no witnesses. Law enforcement officials are faced with a flood of complaints from property owners and local residents, endless reports to file, and the lack of tools to effectively combat the problem. 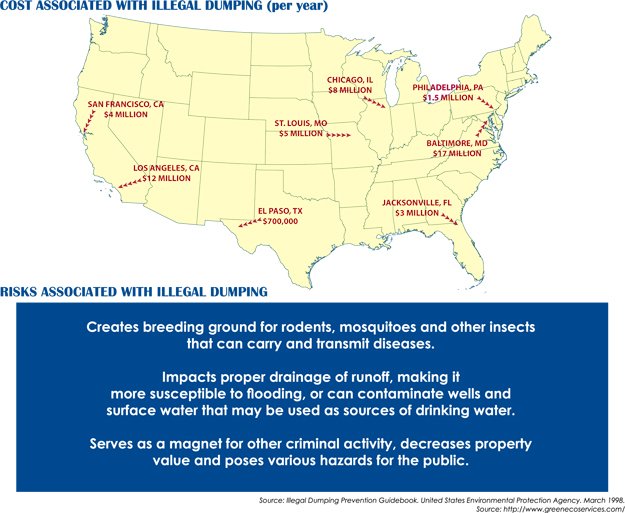 Prosecution rates for illegal dumping have been proven to increase with the use of the FlashCAM. The system captures high resolution images that can help identify suspects and vehicles, providing key evidence to prosecute. Even license plates can be captured up to 250 feet even in TOTAL DARKNESS.