You are here: Home1 / About Us2 / Solutions3 / Stop Graffiti

Graffiti vandalism is a crime that is continuing to destroy communities across the U.S. It can be associated with a “street artist” signature, hate crimes or indicating gang territories. There isn’t a specific demographic profile, but taggers most commonly are adolescents that are “angry” towards society and showing their rebellion, bored, frustrated or just lacking adult supervision.

Cities are spending MILLIONS of dollars in graffiti prevention by painting over or removing these tags, but are unable to respond at the fast rate of the taggers due to limited resources and budgets. The longer the issue is left unaddressed, the bigger and unmanageable it becomes, even attracting other crime into the area.

Many of our customers that use the FlashCAM for graffiti prevention have used the system to prosecute repeating taggers. The high resolution images captured by the FlashCAM clearly show these individuals in the midst of tagging, or stopping to look at the camera. These images provide the necessary evidence for identification and prosecution.

Graffiti has been prevalent in the U.S. since the 1960’s, and has evolved from political statements to gang territory inscriptions and even “street artist expression.” Regardless of the intent, “tagging” as an art form or gang affiliation, is a crime and constitutes vandalism of public or private property. The costs associated with cleaning up graffiti are considerable, with an estimated $12 billion dollars per year spent by taxpayers nationwide.

As with other forms of vandalism, areas where graffiti is not controlled after being “tagged” tend to attract other types of crime in the vicinity, creating a perception of deterioration in neighborhoods. This can greatly impact the community by resulting in a loss of revenue for local businesses, public transportation and the overall devaluation of properties. Graffiti issues are often related to other crime and problems such as public disorder, shoplifting, gangs/gang violence and property destruction.

Since criminal behaviors are related to one another, it is important to address nuisance crimes at an early stage before they become unmanageable. Subsequently, graffiti is not a minor problem, but rather a major financial burden that can devastate the well-being and safety of communities and their residents. 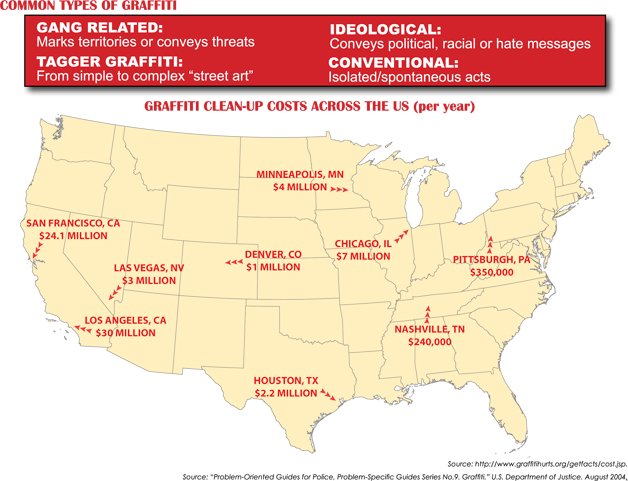 The FlashCAM is a solar-powered, portable, motion-activated crime deterrent system that helps protect communities from nuisance crimes and allocate valuable resources to other areas of need.

FlashCAM users across the country have reported a dramatic decline in graffiti in the areas that the systems have been installed. The unique deterrent features, such as the customizable voice warning and bright flash typically deter the criminals before they engage in the activity.

The system also captures high resolution images that can be used to identify the individuals in the act of “tagging”. These images can be used as evidence for prosecution, or even identify vehicles, including license plates up to 250 feet even in TOTAL DARKNESS.